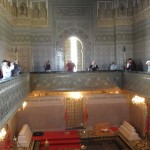 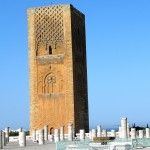 Today Rabat is preeminent among Moroccan cities as the royal capital and flaunts aspirations of a modern power by her lavish display of recent major monuments.   Located on the Atlantic Ocean at the mouth of the River Bou Regreg, Rabat faces her bedroom community of  Salé across the river.  Silting problems have diminished the city’s role as a port but Rabat and  Salé still maintain relatively important  textile, food processing and construction industries; some are from sweatshop labor by major multinational corporations. 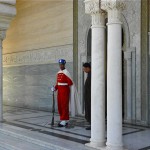 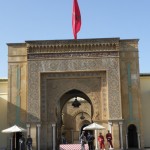 Main Gate of the Palace of the King

More interesting to me is, that due to its location on the North African coast and at the mouth of a river, Rabat has been a strategic location for indigenous people (as early as 8th Century B.C.), followed by the Phoenicians and then Romans both of whom used the location as outposts for their empires. Romans also supplied and shipped wild and exotic African animals throughout the empire for glaidator circuses. 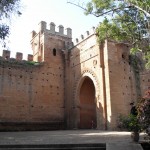 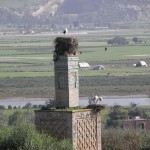 Long after the fall of Rome, Berbers established an independent kingdom and then apparently embraced Islam in the late 7th centurey A.D. Internal tribal struggles continued for the next 300 years until 12th century when the Almohads arrived to build a casbah from which they intended to launch the Christian Reconquista in Spain. Rabat enjoyed a brief period of glorious successful campaigns in Spain ending with the death of Almohad sultan Yacoub al-Mansour in 1195 and abandonment of his mosque/minaret construction project 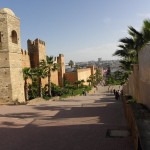 Walls of the Kasbah des Oudaias 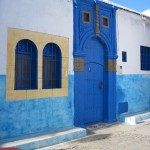 Rabat’s star then dimmed until 17th century when a major influx of Muslim refugees from Christian Spain swept in a colorful flood of Christian renegades–Moorish pirates, freebooters and multinational adventurers– the sister cities of Sala and Rabat on either side of the river mouth flouished as corsairs, brazen pirates who ventured as far as the coast of America for Spanish gold and the coast of Southern England to capture slave labor.  In 1627 Rabat and neighboring Salé united to form the Republic of Bou Regreg, run by what were now labeled Barbary Pirates who used the two cities as base ports for launching attacks on shipping. The pirates continued to have free reign until about  until early in the 19th century.

In 1912, when the French officially invaded Morocco and established a “protectorate,”  they relocated the country’s capital from Fez to Rabat.  When Morocco achieved independence in 1956, Mohammed V,  the then King, chose to have the capital remain at Rabat.