If not the Yellow Brick Road it is at least a cobbled ancient road down which we are headed to Suso. To get there though we drove through alpine like mountains with sheep and dairy farms dotting the pine covered mountains. We swooped onto a wide valley to our monastic destination.

Founded in the mid-6th century by a holy man Millán who settled at the site which is now known as the Suso (‘Upper” or “Above”) Monastery. He was joined here by other reclusives and together they founded the Cogolla Community. During Millán’s lifetime a small monastery was built on the hillside in Visigothic style which essentially means (if I understand it) that the interior of the church was carved out of existing natural caves. Enlarged frequently over the next two hundred years and was rebuilt in 929, during the reign of Garcia Sanchez of Navarre funded by his royal donation. Now inaccessible to visitors, we were directed to Yuso.

The first known writing of the Spanish language occurred in the Suso scriptorium in the 9th and 10 centuries, an event largely responsible for Suso/Yuso’s UNESCO heritage status.

Yuso (“Lower” or “Below’) Monastery was added to the general complex in 1504 starting with the church, which was built within sight of the older monastery. This was followed by the two cloisters, sacristy, chapter house, library, gallery, and rooms around the Patio de la Luna. Finally, after numerous repairs, the square in front of the monastery was completed in the 18th century. By the time of the Yuso additions a kind of cult following had built up around the life and work of Millán. Also in architectural history there is a controversy about the evolution of arches whether Moorish, Visigothic or Mozarabic and how that fits into the Christian view of ousting the Moors.

We left Yuso and after a short drive through rolling vineyard covered hills we arrived at our Parador, historic hotel that was once a convent with plenty of time to wander the cobbled streets of the village of Santa Domingo. 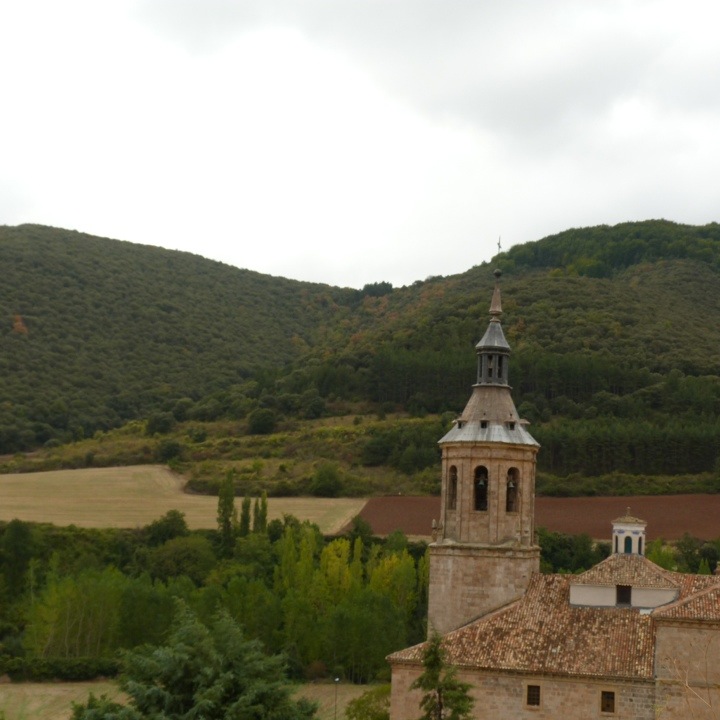 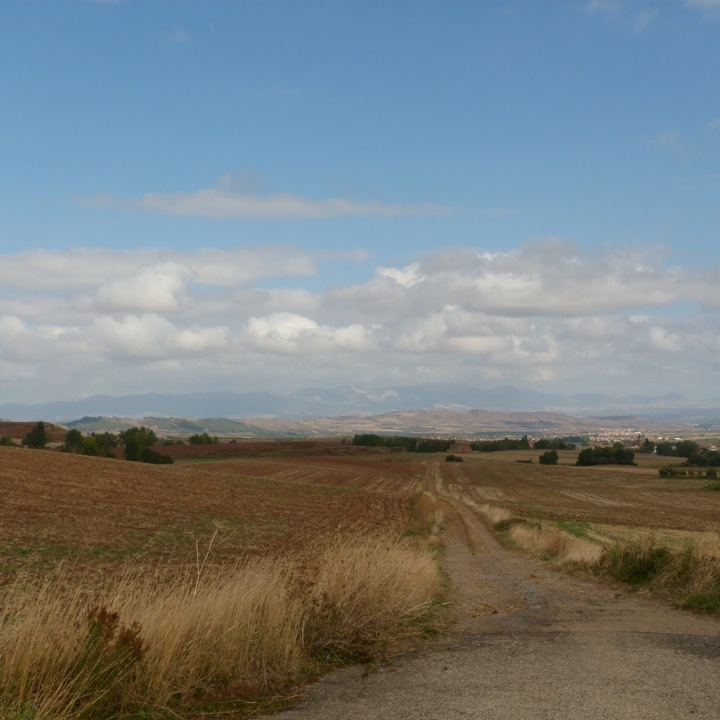 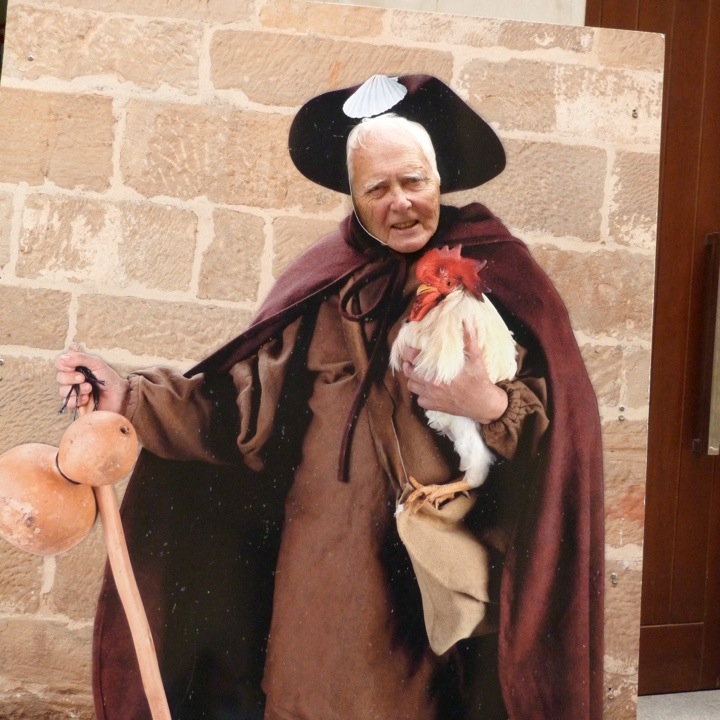 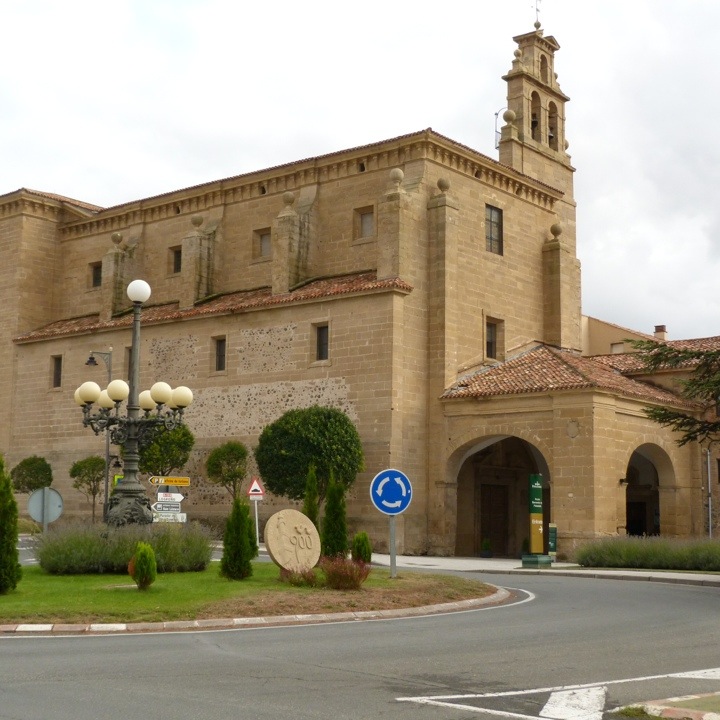 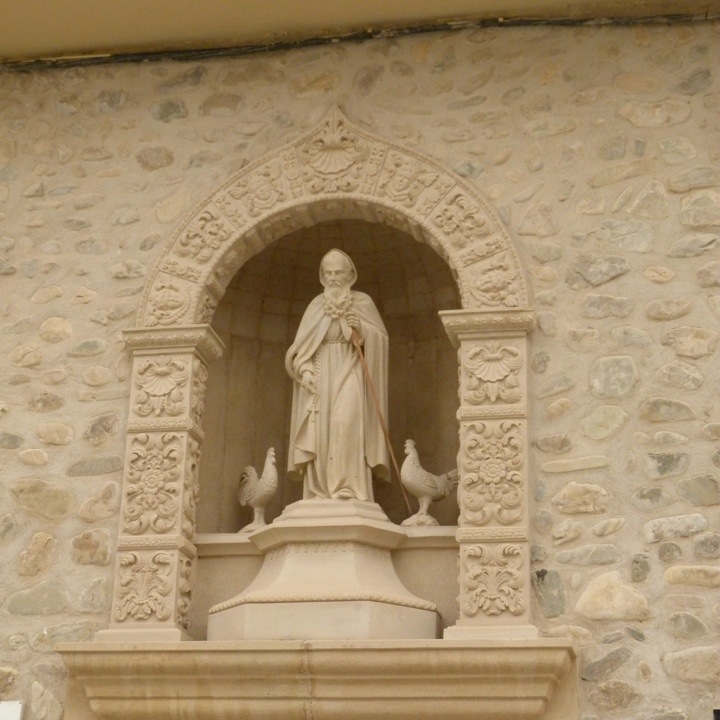 Bob Along the Promenade 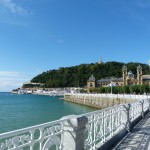 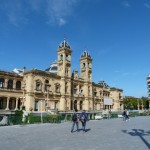 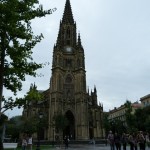 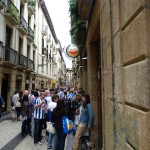 The Basque Love to Compete and Win 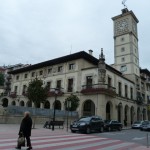 Here in San Sebastian, today marks the end of a weeklong international film festival established in 1953. Locals are all a twitter with celebrity. A three star Michelin restaurant is around the corner from our accommodations and according to the young concierge who checked us in, numerous “famous” stars were noted going in for dinner as she waited for the bus. One Spanish couple in a pintxos bar, apparently well lubricated with Rioja, wanted to believe that I was Jaime Lee Curtis so enthralled with cinema are they.

The historic charm of San Sebastian is based on it’s building boom and popularity with European royals who spent summer months here throughout the last half of the 19th century. This “Belle Epoque” continued as Spain’s Queen Maria-Christina installed her summer court in the local Miramar Palace on the bay. Evan Franco spent 35 summers on this Bay of Concha always referring to it only as San Sebastian, never Donostia, its Basque name. Throughout World War I moneyed Europeans took refuge here enjoying luxury hotels, casinos and theaters. 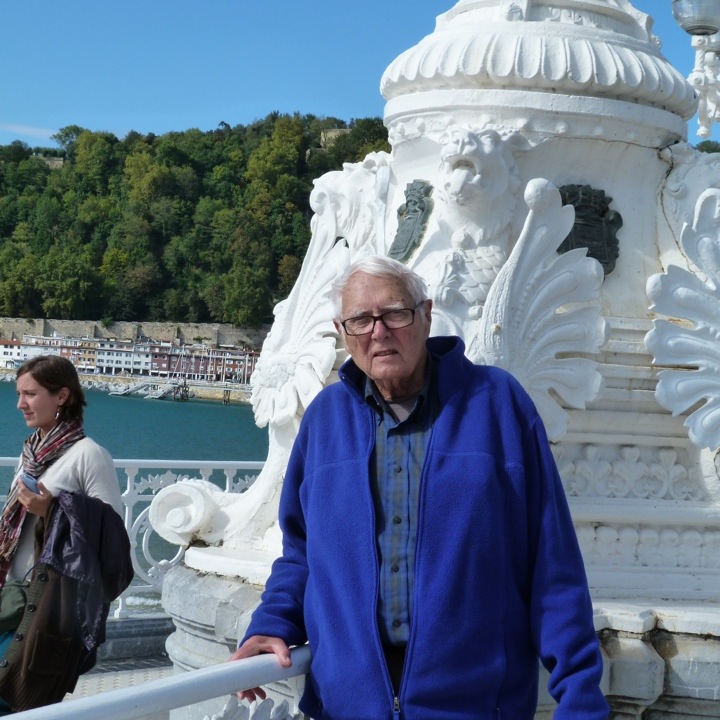 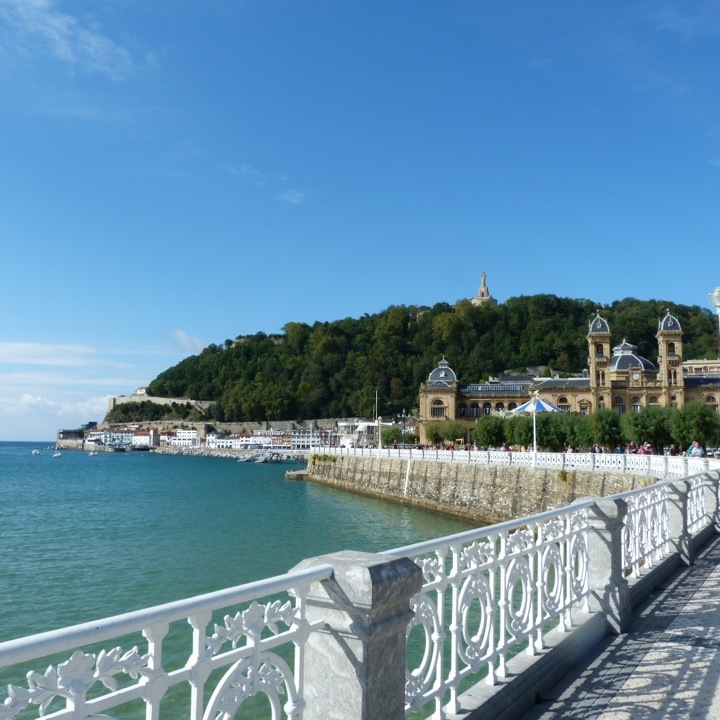 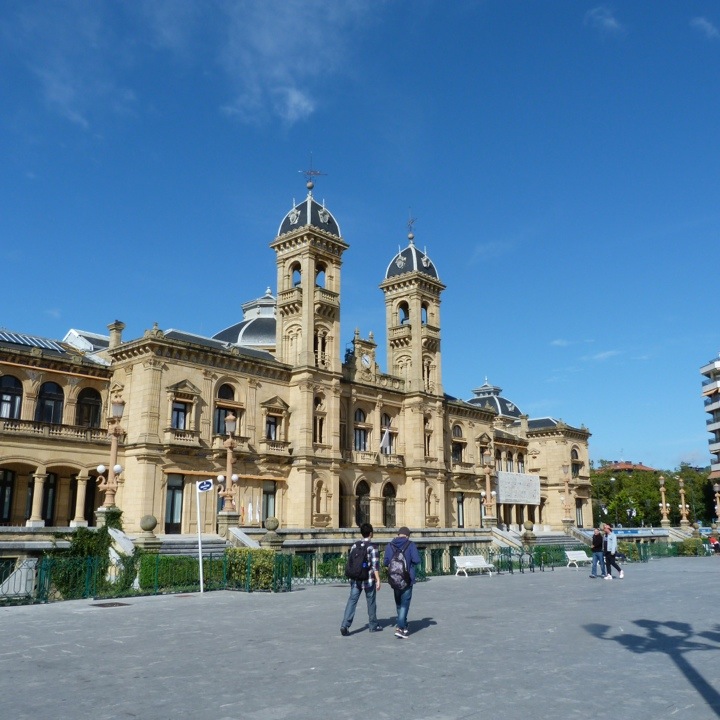 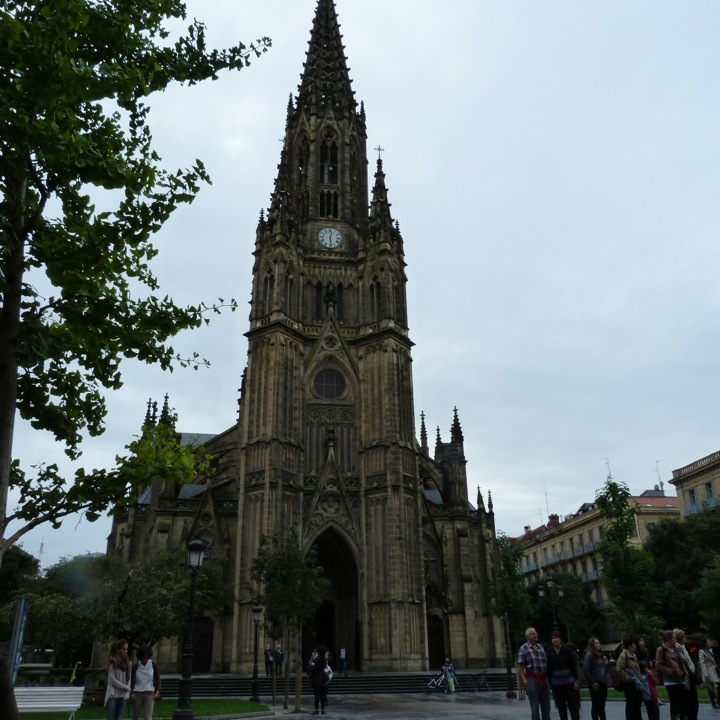 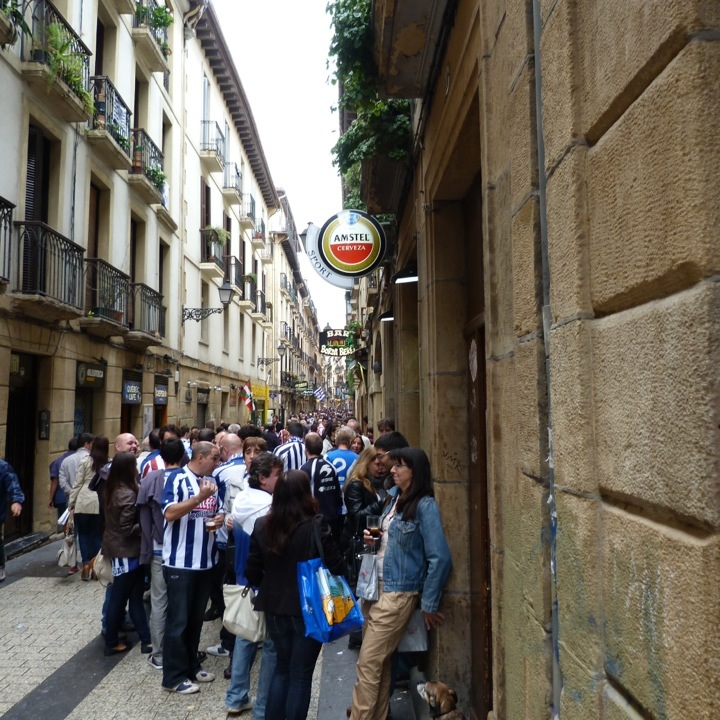 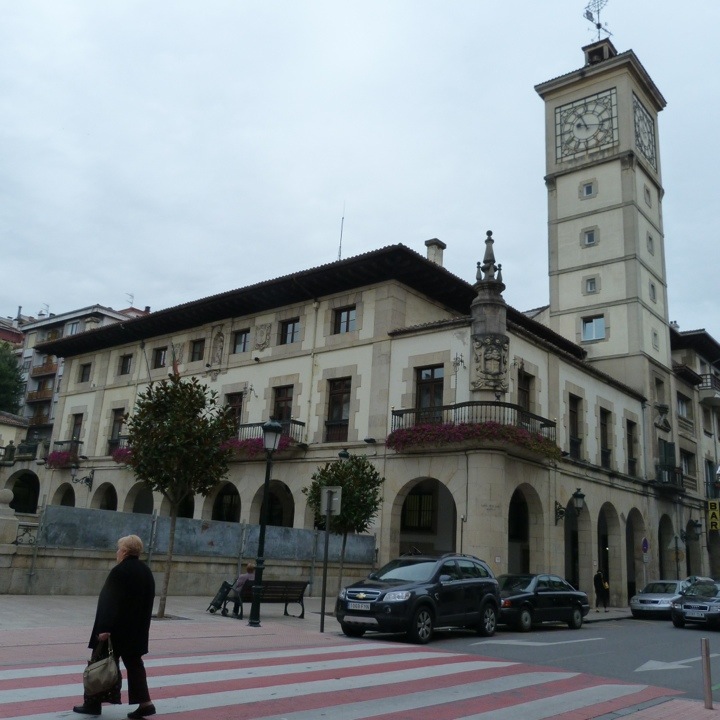 First to be aware of being at a nexus of art and architecture is thrilling, And then to have a huge exhibit devoted to one of my favorite contemporaries, David Hockney is beyond my ability to wish. In my mind I had been moaning to myself about his return to his native Yorkshire and what I thought was the probable loss of bright edgy colors of his LA period. How wrong I was!!

Bright landscapes inspired by his native county of Yorkshire form the core of this exhibition They fill the museum’s second floor–150 works—oil paintings, acrylics, charcoals and for me the most exciting are iPad drawings demonstrating how he utilizes this tool to create enormous canvases using digital photography spanning separate canvases. Most of this body of work has been created in the past eight years. The exhibition offers a unique vision into Hockney’s creative world and demonstrates his enormous capacity to represent nature using different techniques, as well as revealing his deep attachment to the landscape of his youth. The exhibit also includes his Grand Canyon masterpiece filled with bright oranges and magentas that make my soul vibrate plus landscapes from throughout California to which I cannot help but resonate. It was so exhilarating that I was reluctant to leave. A very good thing we had seen the wonderful cerebral permanent collection on the first and third floor so my viscera could just vibrate nonstop.

Most of the artists represented in the permanent collection were born in an era of political unrest and have been selected because they have made a significant contributions to the development of contemporary art. Each according to Guggenheim literature, has “reacted to the idealogical, economic, social and political forces of a tumultuous century.” I respond to and appreciate most with my intellect. Richard Serra’s The Matter of Time generates my usual passionate response when I really resonate. Serra along with David Hockney and of course Frank Gehry, the architect, were my takeaways, as if you care. What a wonderful gift to be able to visit this stunning site. 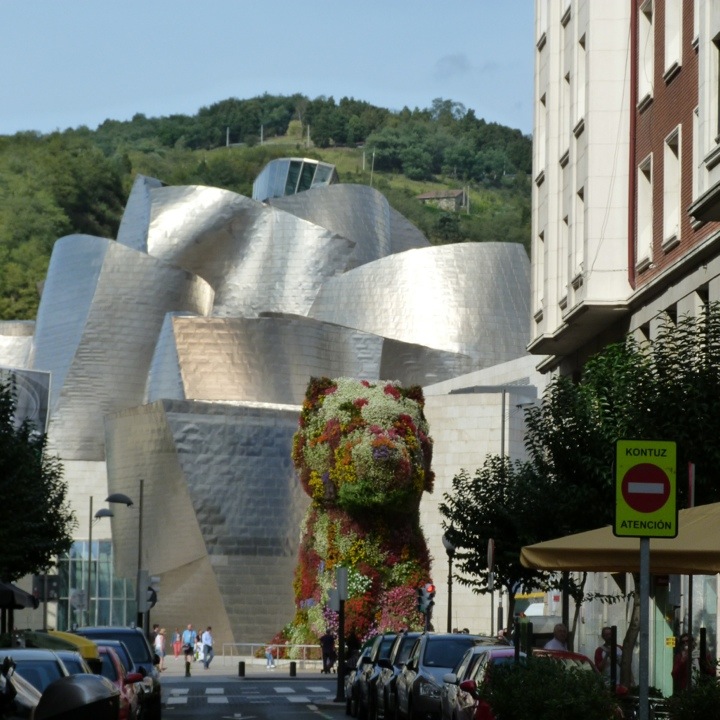 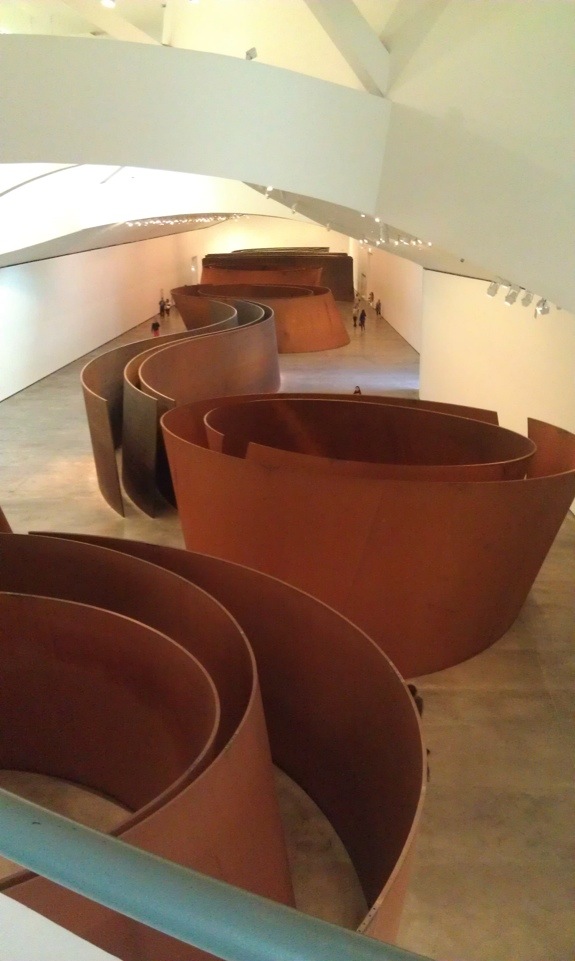 We left Santillana del Mar mid-morning after a fairly brisk walk through the cobblestone village that attempts to capitalize on their proximity to Altamira.

We had visited the Neocave last night, The actual cave was declared a World Heritage Site in 1985. Extreme volume of tourist traffic began to erode the integrity of the caves and they were closed to visitors in 1997. The “Neocave” a joint venture of Santillana and the regional government of Cantabria, claims to replicate the original in scope and detail of the cave which was inhabited between 22,000 to 13,000 years ago. Certainly to the unpracticed eye, the facsimiles are very beautiful and impressive especially having grown up in the Picasso era of primitive art influence.

The drive to Bilbao along the rugged Atlantic coastline and in and out of craggy mountainous valleys, was fresh and sparkling once again after a night of soft rain.

Entering Bilbao along the river and suddenly confronted with the Frank Geary’s Guggenheim was absolutely jaw dropping. Traffic congestion soon swept us up into concentrating on Emily (our GPS named for our granddaughter). Dense crowds blocked all the main arteries of commerce and tourism protesting the sudden raise in taxes and expressing fear about the Spanish economy. We had read on line about protests in Madrid, but this was the first that we had encountered.

We walked to a highly acclaimed restaurant, one part of the “Slow Food” network worldwide, for an incredible late “lunch” which has become our habit. We are way too old to handle dinner at 9PM!!!

Walking back to our hotel we were swept up in women and children protesting, students carrying banners and workers carrying signs fearful of what this means for their retirement all under circling helicopters.

Tomorrow is Guggenheim day for the Nelsons. 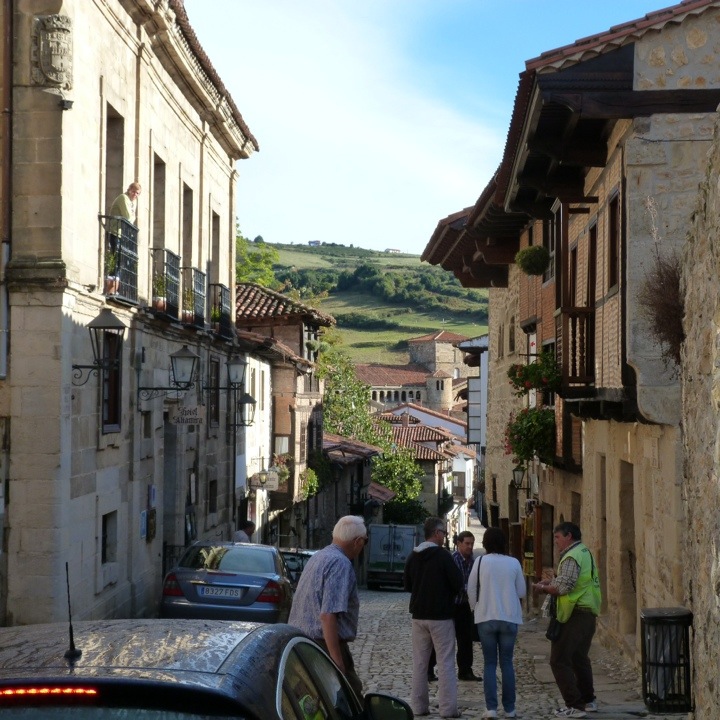 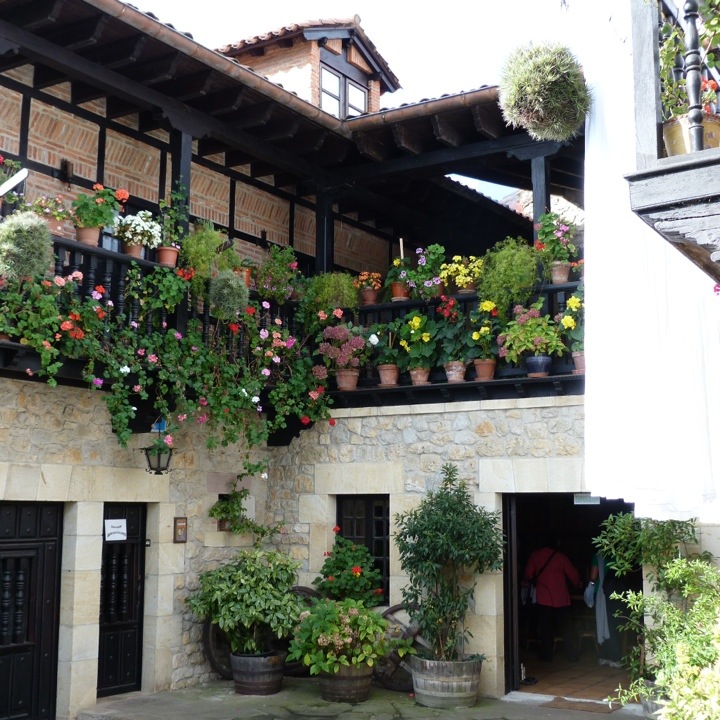 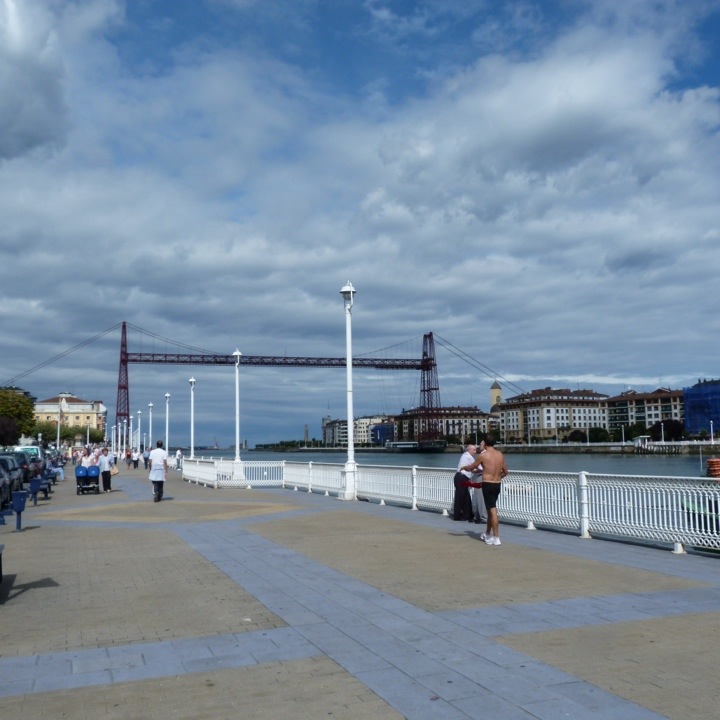 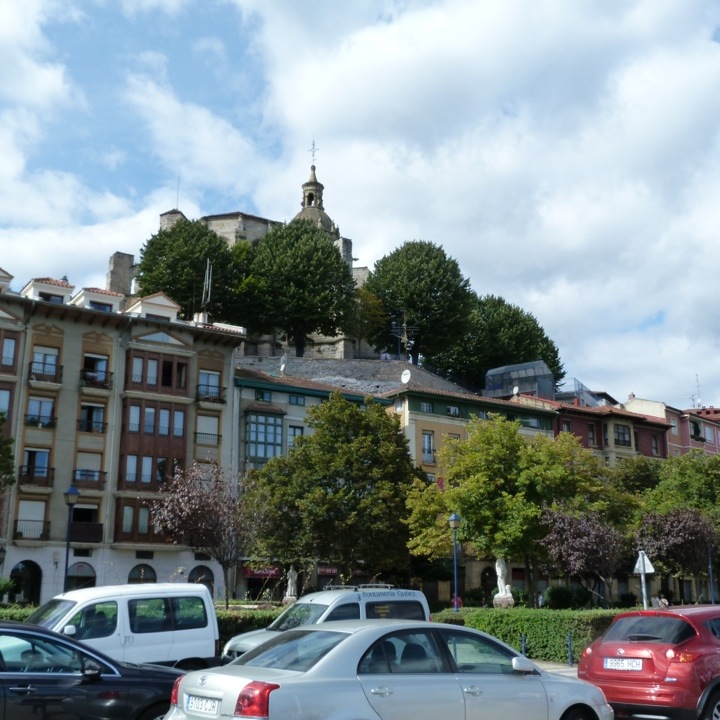 Today was a perfect day for driving into the mountainous regions of deep ravines, craggy peaks small village enclaves clinging to the hillsides much like Switzerland. We crossed the autonomous regions of Asturia and Cantabria through panoramas of high peaks and deep river valleys flanked by patchwork quilt of green tilled fields outlined by hedgerow.. Drippy skies cleared off and on with bursts of sun spotlighting Roman aqueducts, ancient stone walls or crashing surf off rocky coastlines. The sunshine came out to stay as we arrived for our first walkabout in Oviedo.

Lodging for the night was like jumping into an edition of Architectural Digest–splendid art, creative lighting, contemporary designer furniture. 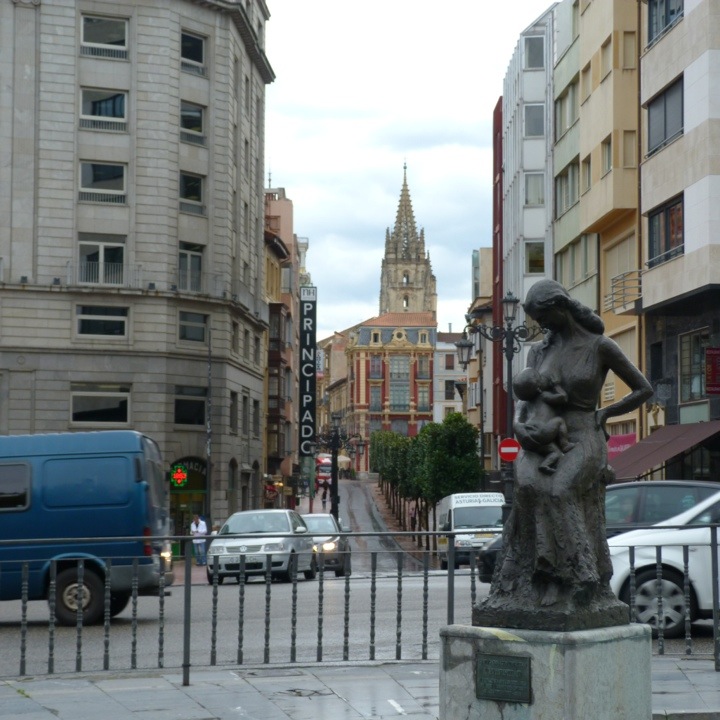 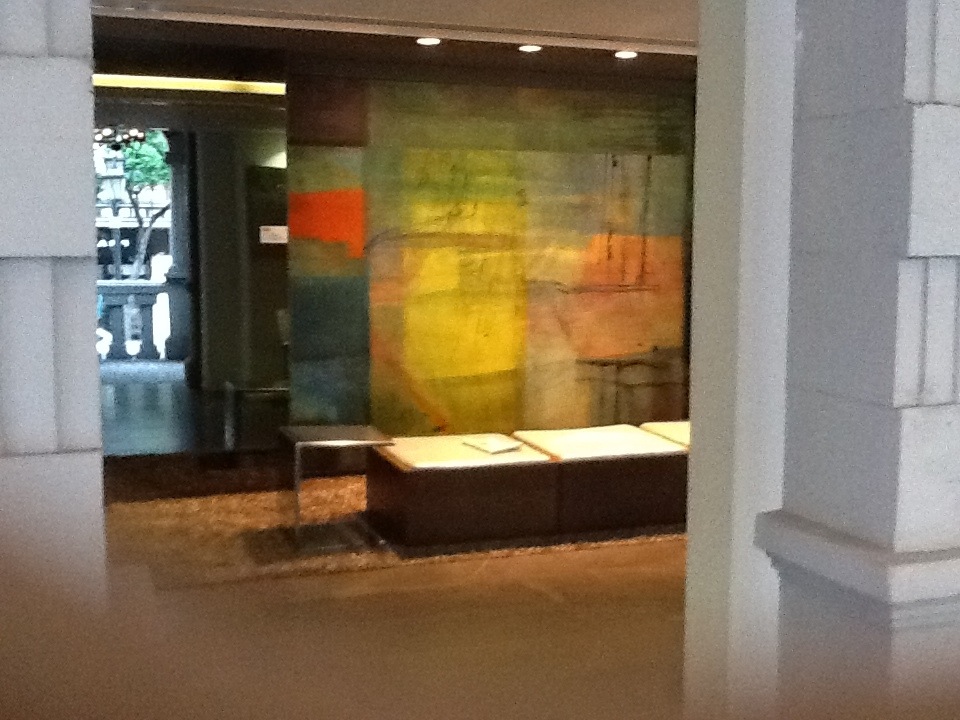 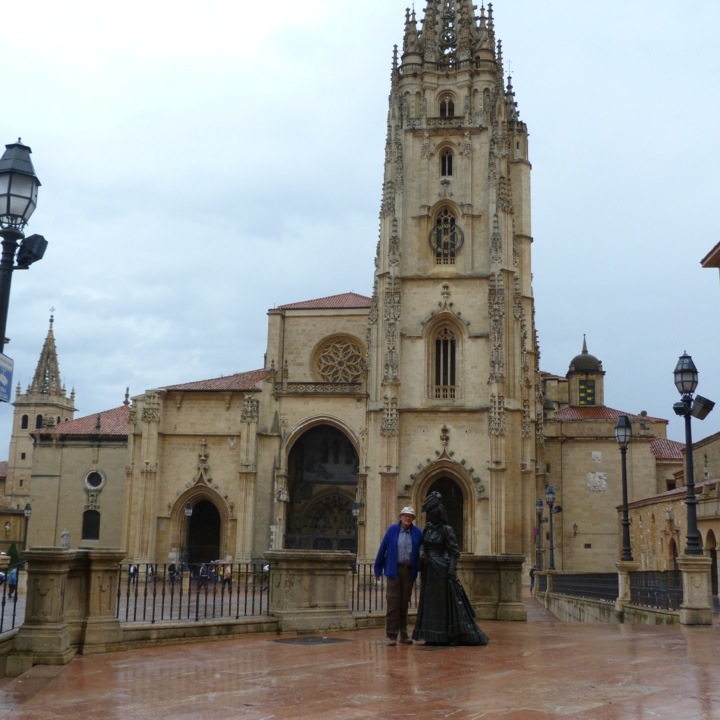 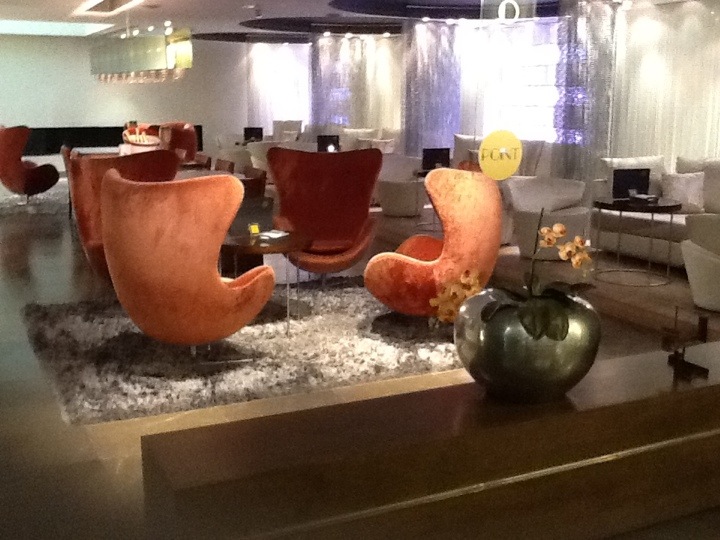 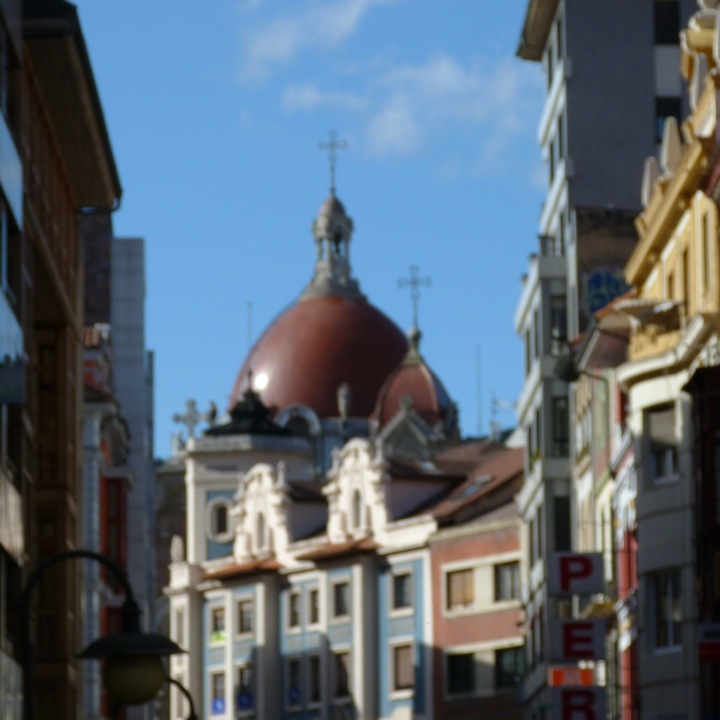 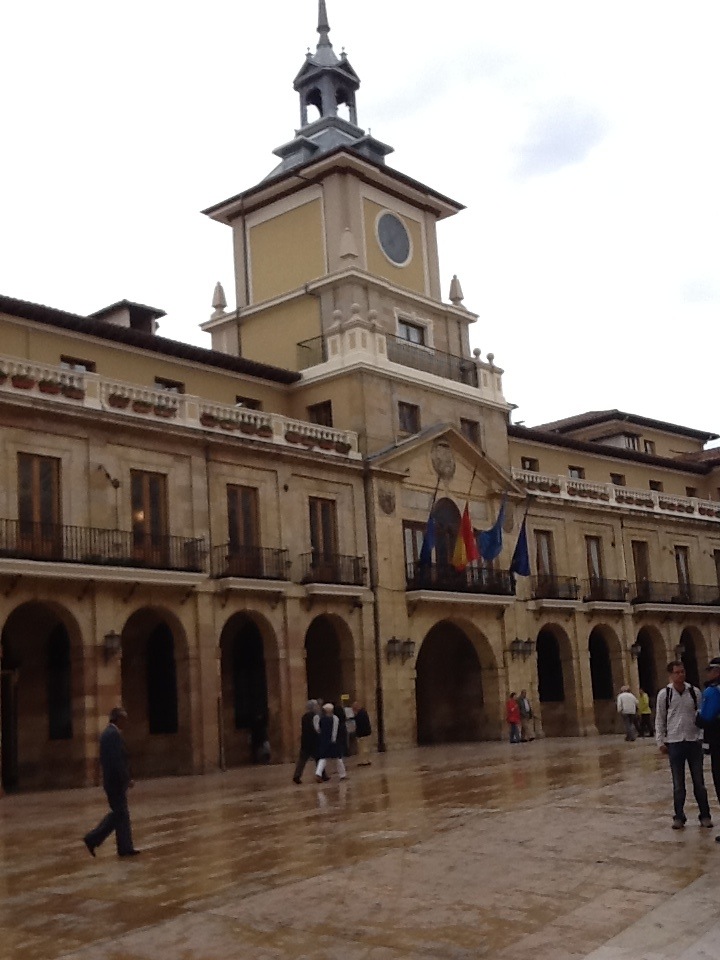