What a difference a day makes!! A good night’s sleep, a tasty breakfast and we were off on the bus buzzing about Nice on a bright sunny day. First Chagall whose entire collection here is all about illustrating the Old Testament but certainly a great representation of his work.

Proud of their longtime resident Matisse, Nice wants to pay tribute to him. Collages and later work is combined with lots of local kids work inspired by his line drawing, graphics and collages. Matisse is also buried next door.

Lunch in the old part of town with a restauranteur that specializes in olive oil. He will close down next week to travel about France for the most tasty of oils, use them in his restaurant and sell them on the internet at olivera.com. Just scrumptious.

Down along the Promenade de Anglais to watch a big international corporate sponsored catamarans race and then meandered our way back to the hotel.

The area around Nice is believed to be among the oldest of human settlements in Europe. A local archaeological site, Terra Amata, documents this fact based on early evidence of productive use of fire.

In about 350 BC, Greeks from Marseille founded a permanent settlement naming it Nikaia after the goddess Nike.

In part because of the combined strategic location and fine port, Nice has changed hands many times throughout its history. For centuries Nice was an Italian dominion. During the Middle Ages, as an ally of Pisa, it was the enemy of Genoa. Both the King of France and the Emperor attempted to subjugate the city but in spite of this Nice maintained its municipal independence. During the 13th and 14th centuries the city periodically fell into the hands of the Counts of Provence, but finally remained independent although associated with Genoa.

Nice then became part of France in 1860. Spectacular natural beauty of the area and its mild Mediterranean climate attracted European royalty as well as English aristocracy to Nice in the second half of the 18th century, when an increasing number of privileged families wintered here. The city’s main seaside promenade, the Promenade des Anglais owes its name to these English visitors.

Meanwhile the Barbary or Corsair pirates were running rampant over Mediterranean trade routes from the 16th to the 19th century. In the middle of the 19th century Nice’ prime location played a significant role in bringing these Ottoman renegades under control.

Nice’ clear air and soft light has attracted some of the world’s outstanding painters, such as Marc Chagall, Henri Matisse, Niki de Saint Phalle (remember Queen Callifia’s Magical Circle in Escondido) and Arman. Their work is commemorated in many of the city’s museums, including Musée Marc Chagall, Musée Matisse and Musée des Beaux-Arts Jules Chéret.
This was an exceptionally long driving day and we pulled into Nice tired and wishing we were going straight to the airport. We yet again squeezed a way too big Peugeot into a SmartCar sized parking space and fell into our hotel room not planning on coming out until tomorrow. Yet as you will see we did the “Intro to Nice” by dusk and early dark and cannot wait to explore it in full tomorrow. 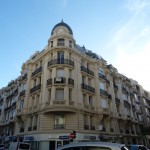 Off On a Walk to Dinner 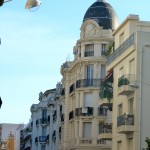 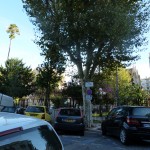 The Edith Piaf Park Just Around the Corner from our Hotel 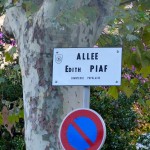 It is Official but no Something Here 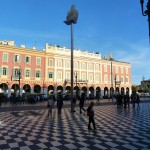 When Will the Figures Light Up? 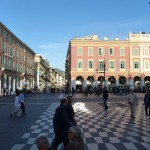 Another Angle to a Beautiful Space 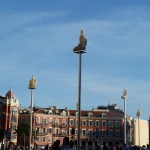 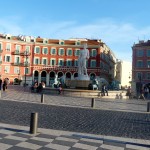 As the Light Softens the Pace Slows 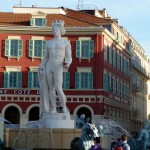 People Stop to Sit and Relax 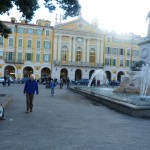 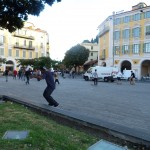 This One’s for you Henry 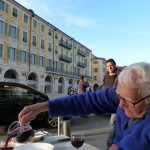 We Found our Restaurant–Right on the Sidewalk 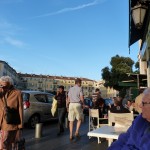 How Fun to be part of the local cafe scene 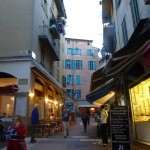 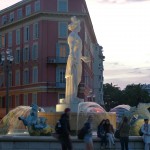 Basking in the Glow 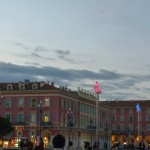 The Various Colors Draw Our Eye 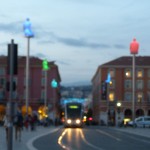 The Lights are On 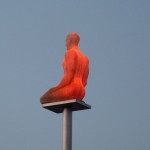 Close View of the Glow–Each a Different Color 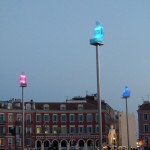 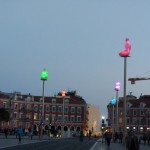 Such a Forceful but Subtle Presence

Are we running out of great but varied weather? It is time to turn homeward. A Mistral is whirling and whining through our second story apartment with an unrelenting high pitch wail. Rain is predicted for tomorrow as we head to Nice.

We drove to Aix-en-Provence, a beautiful drive through a vast valley lined on every side with limestone mountains thrusting skyward and often frosted with churches or villages at their very peaks.

Aix was a busy congested city filled with students, shoppers and traffic teeming around the visitors center which is in the heart of a very upscale shopping mall. All the beautiful 17th and 18th century mansions and neighborhoods have international brand shops installed at the street level with plaques slapped on side walls designating the historical significance of the original building. It would take us more than the day we were able to spend to get beyond the initial impression and delve into the rich museums and history of Aix.

Suddenly we realized that we have only two days left and although we have been busy everyday, loved everything we have seen, we decided to check with our resident authorities Debi and Jim Idell to make certain we made the most of the last bit.

In the 18th century an increased demand for pigments used in the textile industry intensified mining of ochres in Roussillon. Numerous quarries and ochre factories were located near the village. One ochre factory, the ‘Usine Mathieu’, is named for the family that owned it from 1870 to 1901. Earkt in the 20th century, mining techniques were modernized, which meant that more profitable ochre mines were exploited. This resulted in a gradual closing-down of ochre mines in and around Roussillon. Since the 1980s, tourism has replaced ochre industry as a source of income.

According to Wikipedia Samuel Beckett spent the war years 1942 to 1945 hiding from the Germans in Rousillon. 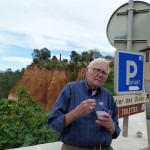 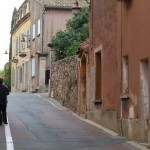 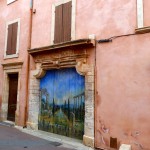 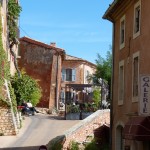 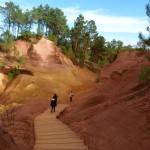 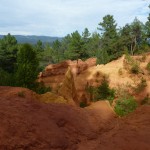 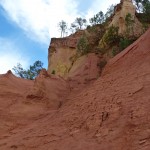 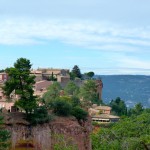 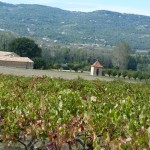 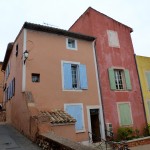 Although Gordes history includes Roman occupation as evidenced by ruins throughout the area, their claim to fame really began in the 8th century. A Benedictine Abbey, Saint Chaffrret, was founded by monks. The building site was an ancient Roman temple that had been destroyed by the Moorish invasion. These literal layers of human history are fascinating, Then in 1031 a castle was added to the site and thus it became known as the Castrum Gordone or the nobile castrum.

During World War II Gordes was an active resistance village and was awarded the Croix de Guerre.

After the war the beauty of the countryside and the uniqueness of Gordes attracted Marc Chagall and his friends like Vasarely for extended periods.

On our way home we stopped at the Museum of Lavender to learn all about the medicinal, therapeutic and aromatic powers of the herb.

Today the Mistral wind blew at full force, cold and unrelenting. Locals told us that rain follows diminished wind. We shall see.