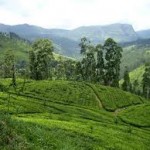 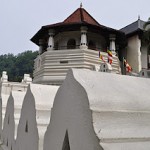 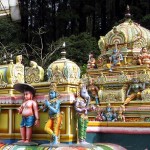 Temple of the Tooth 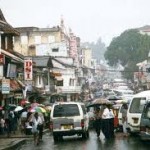 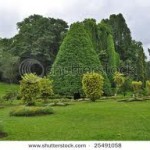 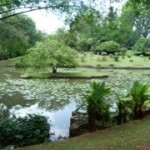 Kandy was the capital of Sri Lanka for two centuries until 1815. The sweet-sounding name of Kandy derives from Kanda Uda Pasrata which means mountainous district. Our first visit was to see the famous Temple of the Tooth, which is considered one of the most important Buddhist shrines in Sri Lanka and a sacred pilgrimage for the devout, holding the tooth of Buddha. Our guide Soo refers to this famous shrine as the Temple of the Tooth Relic but with his pronunciation some of us heard “Temple of the Tooth Fairy.” Somehow this sent us all into peals of uncontrollable laughter after a relatively long day.

The Temple of the Tooth is also historically significant as the location where the last Kandyan chief handed over power to the British Empire in 1815. The British immediately built a large Anglican church on the sacred grounds adjacent to the temple as a show of power and it is still intact today. Tamil Tigers bombed the main Temple complex entrance in the late 90s so the entire area is gated off and security is extremely tight subjecting all visitors to bag searches and metal detectors.

Around the temple complex, there is also the Sri Dalada Museum dedicated to the Tooth Relic as well as the Raja Tusker Museum, a memorial for Sri Lanka’s most famous elephant who often carried the Tooth Relic casket during the elaborate festival of Esala Perhera.

Following the temple visit we walked the Royal Botanic Gardens along with courting Sri Lankan lovers and young families enjoying a gorgeous day in an exquisite park. The gardens are a favorite destination for locals and well deserved source of pride and history. 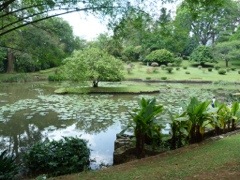 After our first successful Facetime conversation with Ashe in which we introduced our fellow travellers-Jerry and Ted from Des Moines, Joyce and Mike from Denver and Jordan from Phoenix-we set off this morning for Dambulla caves.

Truly an ancient city, Dambulla had inhabitants as early as the third century BC and today is best known for the most extensive array of cave temples in Sri Lanka. Dambulla Cave Temple is a UNESCO World Heritage Site. Although there are 80 caves in the area, we visited only the five main caves found beneath a vast stone outcropping. Elaborate murals adorn the walls, some honoring the Buddha’s life, others featuring the Hindu pantheon—all gazing down upon a phalanx of marvelous statues: 153 Buddhist, three of Sri Lankan kings, and four of non-Buddhist deities.

Access to the caves requires a steep stair climb alongside other tourists, devoted pilgrims and Buddhist monks. Easy when compared with the day before at Sirgirlya.

Lunch was a delicious array of traditional curries all prepared from the fresh local produce using Sri Lankan native vegetables and spices which we had seen in the enormous wholesale market yesterday. Prepared and served by a village family in their home, it was a delightful setting on terrace overlooking a forrest of jackfruit trees in which giant squirrels leapt between high branches as if for our entertainment.

We then were off to Kandy. 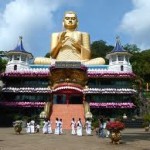 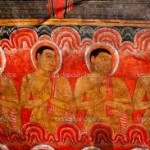 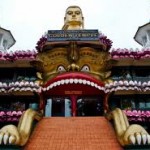 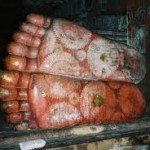 The Feet of Buddha at Dambulla 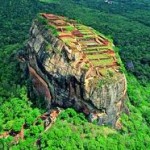 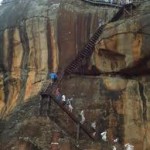 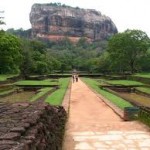 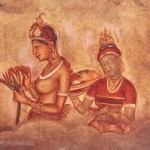 In 5th century B.C., according to Michael Odaatje in Running in the Family, poems were scratched onto the rock face of Sigiriya–the rock fortress of a despot king. These were short verses to the painted women in the frescoes which spoke of love in all its confusions and brokenness. Poems to mythological women who consumed and overcame mundane lives. The phrases saw breasts as perfect swans;eyes long and clean as horizon. The anonymous poets returned again and again to the same metaphors. These were the first folk poems of the country.” 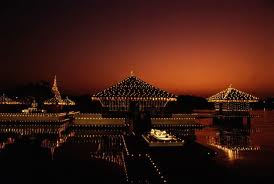 We are up early and out to explore Colombo, Sri Lanka’s capital, biggest city and major port. Columbo blends together all the colors and cultures that make up the island nation, weaves them into a patchwork of markets, gardens and buildings both humble and imposing, and wedges all along a narrow strip of beachfront.

We are fascinated by Colombo’s colonial heritage but we tire quickly of the diesel fumes, the traffic congestion

and the starkly functional modern buildings on Galle Rd, the city’s main artery. Cultural and historical attractions in areas such as Fort, Cinnamon Gardens and Petal are rich and varied.

Garagmaya Buddhist Temple and Monastary serves not only as a place of Buddhist worship; it is also a centre of learning. The temple is involved in Buddhist welfare work including old peoples’ homes, a vocational school and an orphanage. The temple is uniquely attractive and tolerant to congregation members of many different religions. 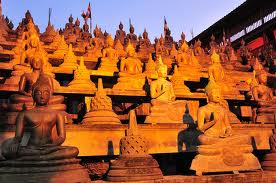 Sunset Among the Buddhas

North of Columbo, on the coast quite near to our hotel is the Ngombo fish market, biggest in the area and major supplier to the capitol city of both fresh and salted fish. 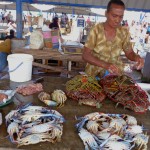 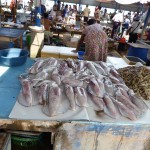 Each Vendor Seems to Specialize 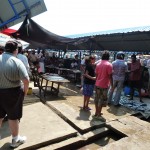 Inside the Bustling Market 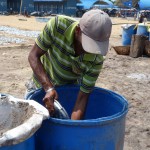 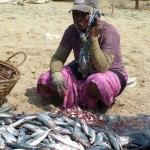 The Ever Present Cell Phone 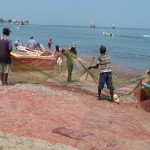 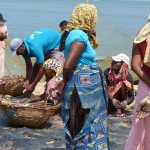 The Women Are Essential to Processing the Catch 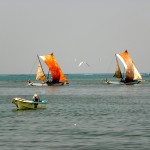 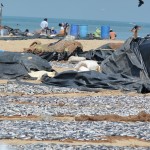 So Why Don’t The Birds Steal the Fish? 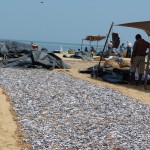 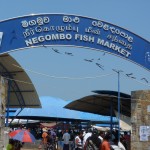 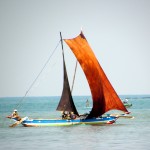 Heading Out for the Catch 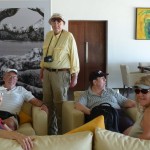