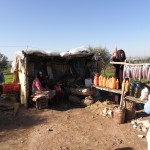 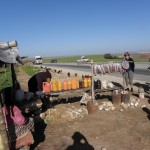 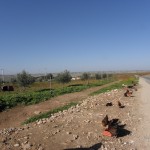 An early departure put us on the road to Fez. Stops and discoveries along the journey began unfolding the daily life of the majority of Moroccans allowing us to appreciate the present as it is still dramatically shaped by their fascinating history.

We meandered along and over the local by-ways through rich rolling farmland, olive groves and vineyards. Most of this verdant land is dependent entirely upon rainfall and the waterways descending from the Rif and Middle Atlas. Land is divided into small family farms or groves, Villagers grow wheat, barley, citrus and cotton in a mild climate a lot like Southern California Migrant workers live on government lands and move around as the seasons change supplementing their income with what they can produce and sell along the roadside. It was the end of olive season and but we saw men and women working together to finalize the last harvesting. 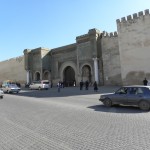 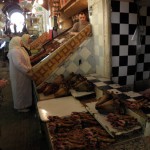 Meknes Outside the Medina

Lunch in Meknes, heart of a vibrant wine growing area, a city divided into ancient and modern. The old part is on the west bank of the river Oued Boukfrane with the new town on the east. Pictured below is the Bab el-Mansour, the main gate leading into the medina proceeding through a ring of battlements. Described as far less touristy than Marrakesh or Fez, there are still abundant souks selling carpets and handicrafts but the local tradesmen and service people are there primarily for the locals.

Volubilis, the day’s highpoint, suddenly came in view as we swung around a valley and passed  through the groves and family farms at the outskirts of Moulay Idriss, a vibrant small town.  The Triumphal Arch signals the site and is visible from the approach.   Ruins largely date from the 2nd and 3rd centuries AD but excavations reveal that the original settlement was by Carthaginian traders in the 3rd century BC. 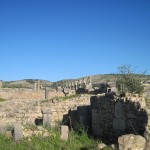 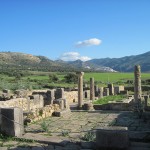 Ancient Volubilis Across to Town Today